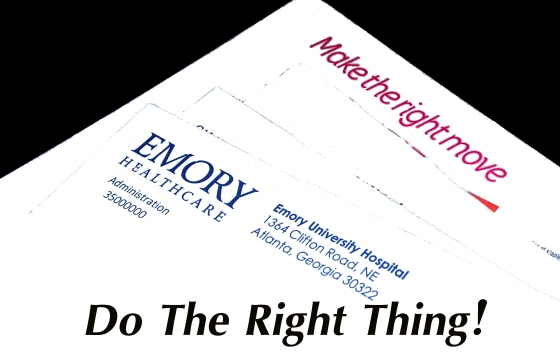 “First they ignore you.
Then they ridicule you.
then they fight you.
And then you win.”

This saying has often been attributed to Ghandi but some version of it has been repeated by a number of people in activist movements the first of which is believed to have been Nicholas Klein of the Amalgamated Clothing Workers Union said in 1914.

It is especially fitting now for as I’d suspected the offending parties are in fact reading my blog. I got confirmation of it today in a letter dated March 21st, the envelope of which says “Administration”, and inside top left-hand corner says “Office of Quality & Risk”. Apparently T.Js Supervisor decided to write and tell me to shut up, himself. He says and I quote; “This is a response to the various concerns you have continued to raise to several individuals within the Emory system regarding your medical care and treatment at Emory University Hospital on December 3, 2015. At the outset, I emphasize that we thoroughly investigated your complaints properly considered your requests, and responded in writing to them. I direct you to the response letters from Emory regarding these matters. Further, we have performed additional reviews after learning you were not satisfied with our response.”

Interesting he should say they’d done “additional review” as all I was told by TJ in her nasty, unsolicited and retaliatory phone call was that she’d already finished her “investigation” and that “nobody is going to call you back”, (before talking over me and rudely hanging up). There was no chance to ask any questions or raise further concerns, and it was clear she in no way wanted to accept any more nor to help solve any. That was the last correspondence I had from anyone in that capacity.

I received no letters showing any evidence of further investigation nor were any of the gaps addressed in their investigation that I’d pointed out. Many questions remained unanswered and he never returned phone calls I’d made to him when I got the initial response showing that his subordinate had not done a fair and complete investigation. Then he goes on to say;

” While we remain apologetic that you have been dissatisfied, please know that our conclusions and decisions regarding your aforementioned complaints and requests have not changed since the time of the response letters. Please also understand that you continuing to raise the same complaints and requests to different individuals within the Emory system will not change our conclusions and decisions regarding these matters.”

So in other words he as agent for Emory will not remove the libel from the ER record, amend the record, bar the offenders from accessing my record, nor take any other actions to protect me as a patient, nor take any disciplinary action against those who participated in the abuse and neglect even if the CEO himself were to insist on it. (That was who’d I’d written by the way; the head of the corporation. I did not know at that time there were two; one for the University side and another for the medical side, so I mistakenly wrote the wrong one first and then was directed to the one for the healthcare side).

Then he goes on to say this…”If you have any new or additional complaints or requests regarding any medical care provided to you at Emory at any time, please let us know. As we have done with your complaints and requests up to this time, we will thoroughly investigate the complaints, properly consider the requests, and respond in writing to them. We have assigned Ms. T.J., Manager of Patient and Family Advocacy, as your point of contact regarding your complaints and requests. Ms. J can be reached at (phone number).”

As it will be when pigs fly before I ever enter their ER again, Ms. T.J.s “services” will not be needed. She is not allowed to tamper in other areas and if I catch her doing so it is a further violation.

He goes on to say;

We are aware that you have posted and discussed online at patientsrigtsadvocate.com your complaints and requests regarding your medical care and treatment at Emory. While we respect your right to express yourself, we request that you remove the specific references to Emory and our personnel. We also encourage you to direct your complaints and requests to Ms. J in lieu of posting them on your online blogs.

Moreover, as we have stated in previous correspondence to you, it is our expectation that our patients have positive experiences while under our care, and we deeply regret that we disappointed you. If you truly remain  dissatisfied and feel that we at Emory have not appropriately met your expectations, please know that you can always seek out your medical care and treatment elsewhere. We do thank you for reaching out to us to express your concerns and for giving us an opportunity to look into them and to continue respond to you.” He then signs his name, LOL.

OK…Now let me get this straight…

First they neglect and abuse me in their ER, then libel me in my records, then refuse to correct their rights violation, turn my own doctors who I’ve known for years against me, play all sorts of dirty tricks to cover it up and sabotage my treatment at Emory and out  and because I write about my experience in my blog he wants me to remove it? Aaaah…Nope, I don’t think so. After a full and complete investigation I find everything to be correct and complete as is.

So sorry you aren’t satisfied.

But hey, if you really did nothing wrong then what are you worried about? I stand on  my principles.

One has to wonder why little old me, one patient in the entire Emory system has that much power that he implies to warrant that sort of extreme knee-jerk (sorry for the pun) reaction (just a strong reflex, I guess).

Me thinks maybe there’s something a bit deeper going on which has nothing to do with me and that even I do not know.

Oh, and the best part…I’m starting my treatment very soon! (from someplace else that is taking me seriously despite all the dirty corporate  tricks and  unprofessional  attempts to distract, dispute, and derail me from my goal).