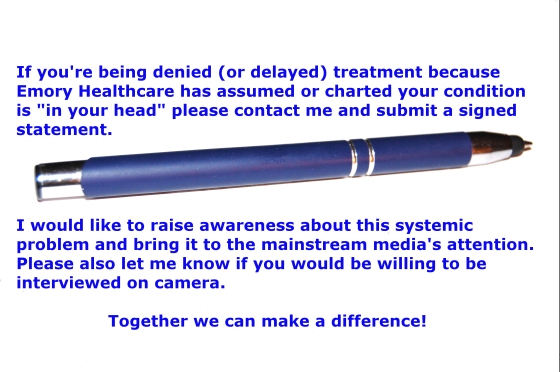 If you have been discriminated against in your healthcare at Emory I would be very interested to hear your story, especially if you have had a bad experience in the ER there.

There is a particular practice referred to as “gaslighting” or “psych-shaming”; in effect calling you crazy and undermining your credibility which is particularly damaging to one’s reputation and it can have the effect of slowing down or stopping your testing and/or treatment for your very real medical condition! When this is entered in your chart (even if it is not an official diagnosis but implied) it can cast a shadow of doubt like a black cloud above your head anytime a doctor in or out of that system requests your records.

To those of you just tuning into this blog I’ll recap briefly; this happened to me at Emory’s main Campus’s ER on Clifton Rd. on December 3, 2015.

I was medically neglected for most of 9 hours while in the ER, then abused physically and psychologically by an on-call neurologist, Dr. P. R. M., and then defamatory verbiage was charted implying that I had some sort of mental illness and/or was “feigning” my condition. His resident a few minutes after leaving the room came back and plopped her butt down on my weaker left foot. (See my archived post The Dark Man to read the whole story).

This atrocity was a malicious form of organized bullying and exploitation and I strongly believe violates Federal anti-discrimination laws; Federal Hate Crime statutes, The Americans with Disabilities Act, and The Protection & Advocacy Act of 1986.

Just yesterday the “patient advocate” T. J.” who actually is internal (employed and paid by Emory) made a harassing call to my home in an attempt to shut me up. She informed me repeatedly that “no one will be calling you back” and implied during the call that she has been tampering and interfering with my right to seek redress from her superiors and others within administration to get the complaint properly resolved.

This too is a violation of Federal law. Retaliation and intimidation against a patient for filing a complaint is strictly prohibited and is an added violation. If she were a true advocate she would know that.

I was instrumental in writing the 5-organization contract in Georgia when the P&A Act was first passed and have had extensive training in both individual and systems advocacy, have worked alongside attorneys, and used to be paid to investigate abuse and neglect complaints from patients in a whole range of facilities.

My agency Alternative/Atlanta; Center for Patient Advocacy covered the metro-Atlanta area. Due to funding cuts the original contract was taken over entirely by the organization whose job it was to manage the funding and disburse it to the 5 organizations.

Advocacy is not like it used to be anymore, and sadly patients have suffered because the demand far exceeds the supply of good advocates. This was my line of work before I became too ill to do it fulltime and before Georgia lost most of its funding.

When I did this officially I advocated for my clients as though they were family. I worked late to make sure they got what they needed, was on call nights and weekends, and it was not uncommon to see me show up at a hospital to meet a patient who had been placed in restraints or who had been physically, emotionally, or even sometimes sexually abused by staff.

I understood that in order to properly advocate for a patient one has to look deeper than “he said, she said” and deciding whom to believe. There was never any question as to whose side I was on; the patients’! There were no divided loyalties or conflicts-of-interest and I pursued the course of action and outcome the patient wanted.

I also participated in annual reviews of all advocates nationwide by an independent evaluating agency, and my charting was deemed best in the country of all advocates employed by this Federal Protection and Advocacy system.

I had hoped to one day make a good living at it, as it has always been my passion to help those who need someone to stand up for them to level the playing field. I have a saying;

They Just Lose Their Funding!

Since my funding was cut I have continued to advocate wherever I saw a need, lending my skills on a volunteer basis to a variety of worthy causes. I believe I have been called to do this and that my life experience is in a sense a test-case which has led me to understand many different populations and their needs.

There is nothing more devastating than fighting for ones’ rights alone, but every cause worth fighting for has its true allies. One just needs to find where they are. I believe that very rarely is anything just an “isolated incident”. Most incidents are a microcosm dictated by pattern, and if you look beneath the surface you find what the pattern is and usually the motive as well.

For every complaint you officially get there are likely many more that never reached the official grievance stage for one reason or another. Patients are often too ill or too busy, or they are too upset by what has happened to them to go through all that’s involved in filing an official complaint, compiling the evidence, and following up (sometimes numerous times) to obtain the outcome. If the complaint is denied, then they are required to complete numerous other formal procedures, fill out forms, call and leave messages, and keep documentation of names, dates, places, and other events relevant to their grievance.

This is precisely why good advocates are needed, especially in instances in which the victim/survivor’s credibility is under attack.

All the self-advocacy in the world will not save you if at the very core those you go to for help do not believe you.

When authorities see one patient with a complaint they might not take it as seriously as when there are 5, 10, 50 or 100 such incidents because now we are talking about a pattern of conduct that raises the antennae of state and federal regulators on multiple levels.

Remember that even when things feel hopeless and you feel like the only one, most likely it’s not and you aren’t. There are people floating around, maybe closer than you realize who have been through something very similar. You just need to locate them, come together, and organize to affect social change!

Maybe you have had an experience at Emory in which you have been discriminated against in your healthcare because someone didn’t believe your symptoms were real, you may have been accused of “feigning” or making them up, “exaggerating”, being “dramatic”, being a “hypochondriac”.

Then you noticed a lack of concern from your treating professionals, their treating you as if you were a minor child and not respecting your boundaries or wishes (see Bull in a China Shop General Neurologist), irritation directed at you, your symptoms ignored or directly disregarded, and ultimately a slowdown or stoppage of care. (For examples of this see my blog post Not Being Believed).

The above terms are buzzwords that are designed with maximum shock value to sabotage a patient’s credibility and an implicit warning to doctors to steer clear.

Let’s just be honest; there is nothing helpful in charting such things about a patient and this can only indicate malicious intent. It is fear-mongering of the highest order and one of the most vindictive acts a doctor can level against a patient because its effects follow the patient long after the doctor is gone. Any seasoned investigator will recognize this immediately and people who work in the ER (if they are honest with you will know the subtext they imply).

If any of this sounds familiar to you please get in touch with me by posting on this blog in the comment box below and I will give you some ways that you can submit a signed statement to me about your experience. If you can also get the statement notarized then that’s even better than just your signature alone.

In my post Educating Doctors of the Future; Affliction as Strength you will read some cogent points arguing against the assertion made by doctors that a patient’s condition is “functional” or “psychogenic”.

I’ve included some links to articles written in peer reviewed medical journals that suggest that patients given this label even when it is given as an official diagnosis do in fact have a real neurological problem.

These citations will help you make your case should you decide to take legal action or even if all you want to do is to get your doctor to stop viewing you and treating you in this stigmatizing way. The post A Few Lateral Moves, but an Ace In The Hole provides you several avenues by which you can file external grievances such as with the Office of Civil Rights and Health And Human Services’ Secretary Silvia Burwell. These are the branches of government most powerful in righting these types of wrongs committed in healthcare settings.

If you are a news reporter and are interested in doing a print of TV story on this or an expose on a longer show, feel free to get in touch with me. I am ready and willing to do interviews and as time goes on there most likely will be others who would speak publicly about their similar experiences.

As Emory has been consistently refusing to take responsibility and to correct this problem I feel it’s imperative now to use all available platforms to exert pressure on the corporation to ensure that they put the best interest of patients first and to stop these unprofessional and corrupt practices. I will be drafting a press release shortly.

–> You can make a statement to The Powers That Be now <—to have legislation drafted that would stop and prevent this from happening to patients on a national level! Several of us organized and have created a petition which will address Institutional Bullying in Healthcare Settings as a unique and enforceable unlawful act treated as particularly heinous because of the extreme power differential between medical professionals and patients and the inherent vulnerability of those of us chronically ill/disabled.

We must rely on doctors to look out for our best interest when we’re ill at a time when we’re at our most vulnerable, and when they don’t they must be held accountable.

It’s only fair, so please sign the petition and add your personal account detailing what abusive/neglectful/reckless, or malicious behavior healthcare professionals and/or healthcare administrators have done to you where it says “Reasons for signing” below the body of the petition on Change.org, and be as precise as possible. Each signature and letter will be auto-forwarded by the site to Secretary Burwell for consideration by her committee and Congress as a whole.

Don’t let these unscrupulous people get away with this type of cruelty any longer! It’s time for the patients to rise up and insist that we be treated as valued customers with the authority to choose what happens to our own bodies, not treated as minor children, the “village idiot”, trouble-makers, nor common criminals for exercising that right!

5 thoughts on “Call To Action: Wronged at Emory? Contact Me”